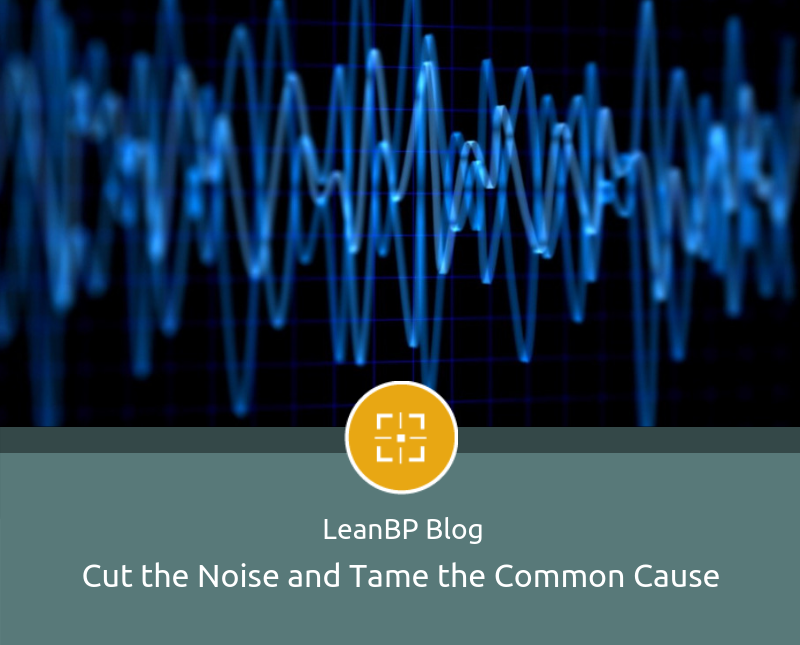 In my last post, I laid out the difference between special cause and common cause variation.

Why is it important to know the difference? Because when you embark on an improvement initiative, variation must be reduced or eliminated. But it’s hard to know where to start, and what actions will make a difference. And inevitably, people will want to blame special causes for undesirable results—things beyond their control.

Most often, other people.

If you mistakenly assume a special cause when you should have identified a common cause, you won’t see any improvement when you eliminate the cause, plus you’ll have wasted time and resources in the effort. On the other hand, if you mistakenly assume a common cause when it’s one bad egg or a single faulty input causing the problem, you’ll put unnecessary rules in place that eventually become a constraint on the system.

Here’s how that played out for me in my own organization.

Getting a Wild Process Under Control

When I earned my Six Sigma Black Belt, I couldn’t wait to sink my teeth into the contracting process at work, which was so slow and unwieldy that it was causing us to lose business. The proper steps of the process had never really been established in the first place, and when the scope and speed grew . . . well, you probably know what happened.

It’s a common problem in business. You start without defined processes, the business grows rapidly, and you become too busy to go back and create standards. New hires learn as they go and depend on the whims of the people who train them. Knowledge becomes trapped in silos, and “heroes” are required to step in and interpret and act on information. (The presence of heroes is a classic symptom of process dysfunction.)

The whole workplace is like a messy junk drawer. And it’s your job to find the one thing you need, at the moment you need it. So why are we shocked when things go wrong?

“A bad process depends on individual heroism . . . to serve the customer.” —Handbook of Maintenance Management and Engineering (Ben-Daya et. al.)

In our case, not only was the product offering variation high, but the process variation among contributors and approvers was even higher, and the outcomes were all over the place. This is what Six Sigma calls “noise.” The noise was so loud I couldn’t tell the difference between an action item that would improve the process and one that might actually make things worse.

One thing that seemed obvious to all of us at the time was that the legal department was a huge constraint, because the time it took for them to review and approve contracts was contributing directly to the loss of major accounts. Upper management was often impatient with the delays and wanted to know what the holdup was.

Looking into individual instances of late contracts, trying to find special reasons for the delay, didn’t yield any insights. Our lawyers refused to adjust their process, saying that do the job with accuracy and integrity, they couldn’t go any faster. So we did what many people do when confronted with a constraint: we tried to throw more resources at the problem. I even tried to hire one lawyer dedicated solely to contracts and was rejected.

But I had made a critical mistake—blaming a department for being slow without looking at the process in detail.

Zeroing In on the Problem

In frustration, I went directly to legal and asked what we could do to improve things. They were open to explaining their processes and showed me the inputs they were receiving.

This was the lightbulb moment.

No wonder things were taking so long that the lead time of the agreement was longer than the actual work scope being contracted. (Another telltale sign of process dysfunction.) The solution was relatively straightforward: create standard work for all routine tasks, including best practices checklists and templates available on shared drives. With that work completed, contract review shrank from weeks or months to five days. Once the clutter of variation was cleared, it was easy (with facilitation and leadership support) to identify a few special causes that were holding up progress—suppliers with faulty processes or employees who would not follow best practices.

We also reduced variation on the customer end by streamlining our offerings. Simply asking customers to specify what they want leads to excess variation—like a restaurant with an unlimited menu. As the seller, you’re likely to be the expert on what’s needed, and providing your customers a prefab menu or sales catalog rather than customizing solutions every time can make a big difference.

Learning to Recognize Common Cause

When your impulse is to blame a special cause for undesirable outcomes, there’s often a common cause hiding underneath.

Do you know someone who’s always late? Maybe he’s always citing special causes—traffic, the kids, the dog, his spouse, the weather. But someone who is always late routinely doesn’t leave enough cushion to allow for variation. That’s really a common cause—a flaw in his process—and not any of the special causes that he blames.

In a business process—contracts or accounting or legal or anything else—the equivalent is excess variation in forms, document storage, etc. There’s so much variation that the process can’t handle a slip-up without grinding to a halt. If someone asks you what the outcome of a process is (in terms of time, expense, or quality) and your answer is “it depends,” it’s a process that can likely benefit from rooting out common causes of variation, and lean tools can help you find that variation quickly and reduce it with standard work.

Blaming people for bad outcomes is counterproductive and usually based on faulty logic, but it can also be unethical (especially coming from leadership, which often allows the sloppy system to persist in the first place but likes to seize on quick fixes when things go south). Remember the dice comparison from my previous post? In a system with too much variation, if a person rolls a die and gets a one, it’s not his fault—even if you were hoping for a six. If you want your employees to roll more sixes, you need to load their dice by instituting standard work, making fewer outcomes possible.

After you’ve addressed common causes of variation, special causes will become more apparent. And then your mistake would be to change your entire process because of one outlier. Don’t punish the team for the negligent mistake of one individual—say, by offering expensive and time-consuming training to prevent more mistakes when really the application of common sense will do.

Since most variation is common cause variation, the wise and respectful way to determine root cause is always to ask what’s wrong with the process. That way, you’re taking people off the hook so they can be open about what happens and how to fix it.  And you can get them engaged and interested in applying lean tools to solve the problem.