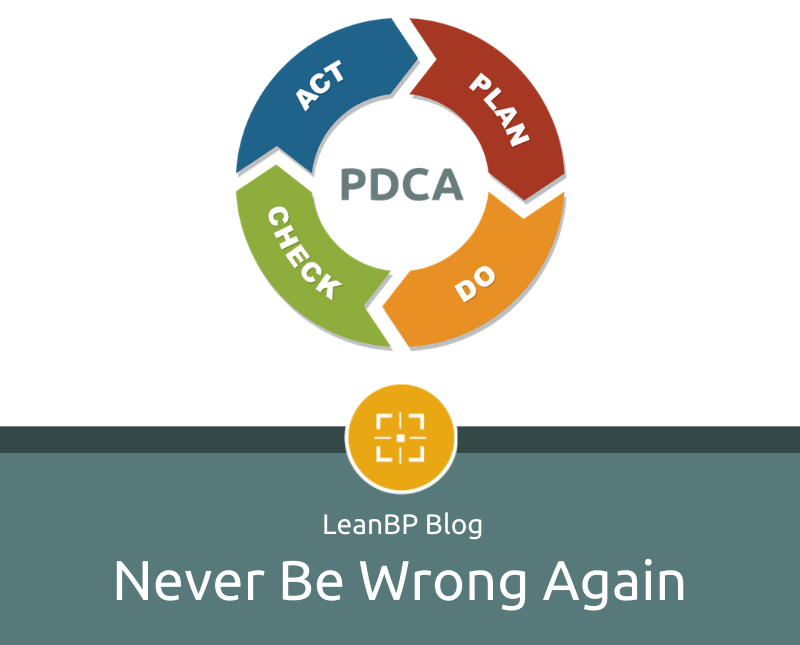 Does that sound like an impossible promise? If you’re trying to achieve big goals at work, it’s hard enough to be right half the time, let alone never be wrong—that would be a miracle.

What if your outlook were less about being right, or being the boss, and more about advancing toward a goal with an open mind—a beginner’s mind? You might be surprised at how much less pressure you feel when you try curiosity instead of preaching, especially if you find yourself responsible for something you’ve never done before. Encourage input, engage stakeholders, try with a prototype, and see what you’ve learned. This way, you’re never wrong and you can’t fail—you’re always one step closer to success.

Approach process improvement with a spirit of curiosity.

You can adopt an open, curious mindset by using the process improvement method defined in the 1930s called Plan, Do, Check, Act (PDCA). This is just modern shorthand for something we all learned in seventh grade: the scientific method, developed by Francis Bacon in the 1600s and influenced by Galileo and other seminal thinkers.

The scientific method requires that you develop a hypothesis, design and conduct an experiment, collect the measurements, and interpret results to take the appropriate action.

PDCA is the same concept—it was developed by the father of statistical process control, Walter Shewhart; made popular by his mentee, Dr. Edwards Deming; and applied vigorously by Toyota, where it became the foundation of all process improvement types.

PDCA is the basis for methodologies like DMAIC in Six Sigma, Reengineering, Agile, and Boyd’s OODA loop. Sometimes you’ll see it referred to as PDSA, or Plan-Do-Study-Adjust, a difference that’s mostly semantics. Regardless of the terminology you use, PDCA’s message is that going slow can actually help you achieve your objectives faster—and if you do that, you’ll never be wrong again.

A Culture of Constant Adjustment

As an aircraft mechanic by trade, this is hard for me to admit: an airplane in flight is hardly ever on course, but that doesn’t mean the pilot is wrong. Crosswinds push the airplane constantly, but a good pilot makes it safely to the destination on time by making constant course adjustments. The same is true for you. Your processes will always degrade, and external circumstances will constantly change, so it’s important to hone your ability to adjust.

The PDCA process is fun and effective, but it’s still work, and you can become overwhelmed with too many options, so focus on the important few. Determine those few by starting with step zero: articulating, documenting, and communicating your mission and vision (remember to set your compass by the blue line). Decide to head for a goal, eliminate a constraint, or close a metric gap. Do you see a problem or an opportunity?

P – Create a Plan with an open mind. As you share the mission with your team, bring them in to help with the plan. These steps are from Toyota’s 8-Step Problem Solving Methodology, and note that these first five steps are all about the ‘Plan’ rather than the ‘Do’:

A good plan also specifies who’s doing what and when.

D –  Do means try your action in a controlled way—propose a small-sample prototype rather than announcing a sweeping solution from on high. When I worked at Delta, I’d say, “Let’s try this on one day,” or with just one team, or for just one week, or on just one task, etc. Including others in the planning and then trying a small initial measure makes it much harder for people to stonewall.

C – Check to see how your experiment works. The truth is, it rarely works as planned. There will be unintended consequences—some won’t be optimal, but others will be positive. Make sure you use data and compare your results to the original process. What did you miss when you made the plan, and what adjustments can you make?

Take some time here. Reflection is part of this step to identify what changed and why, so that you can apply that knowledge to other processes in the future. Since the stakeholders were part of the plan from the beginning, they’ll be invested and will want to get to the bottom of what didn’t work so they can tweak.

Finally, A – Act, which means you either adjust the plan and return to the beginning, or you standardize a successful process. Your prototype might not have worked as you imagined, but that doesn’t make it wrong; just tweak the plan and run the experiment again. Think of PDCA as a circle or a loop you pursue until you get the results you want.

Be careful not to be too satisfied with incremental change. Done right, PDCA is a virtuous circle that creates an environment of innovation. I’ve seen a program manager in Air Force Acquisition reduce the contract award process by 28% during the first loop of PDCA, and then by 50% in the second; I once managed a team of aircraft painters who took their process from a maximum of 28 days down to ten. When your loop takes where you want to be, your final step is to institutionalize the new process.

PDCA isn’t a one-and-done concept—it’s meant to be repeated.

I used PDCA frequently at Delta TechOps, because when I was put in charge of other departments outside my original shop, I was an outsider. In terms of buy-in, it was far better to include team members and experiment than dictate solutions in situations I was initially unfamiliar with.

I also use it as a teacher and consultant. In fact, my Lean Applied to Business Process course has been a continual experiment since its inception. At first there was a loop that I approached with a beginner’s mind: how does lean apply to non-manufacturing processes? I was in aircraft and component maintenance at the time, so I wasn’t sure and there were plenty of doubters. But I worked with small crews to create prototypes, proved its application, and documented its benefit. Then the next loop started, and I expanded. Could it apply to the administrative processes that support maintenance, like engineering? Yes, it turned out. How about sales? Marketing? Legal? All yes. Then, could I create a course based on this knowledge? Yes. And Lean Applied to Business Processes continues to evolve based on evaluating customer feedback, trying new simulations, reading about new techniques from different disciplines, and so on. That’s PDCA in action—the more you learn, the more you’ll want to know.

Once you allow yourself the luxury of a beginner’s mind, you’ll find yourself interested in process outcomes you hadn’t thought of in the first place, which makes continuous improvement something you’re much more likely to stick with. And the PDCA process allows you to use facilitation as a leadership tool—capturing the pent-up ideas of your employees or co-workers and engaging them in creative solutions. It’s a far better solution than trial and error (which usually just stops with the error). I’ve seen it turn around careers, departments, and even entire businesses.

Take advantage of others’ experience in using PDCA. You can use the Toyota 8-Step Process to guide you—it defines standard work for problem-solving. To place process improvement fully in context and get the most mileage out of it, you can use my Lean Green Belt Template for all your efforts and certifications, from mission articulation all the way through standardization and reflection. It takes you step by step through the PDCA cycle. If you’d like a copy of this template, or want to ask me any questions, email me at bill@leanbp.com.